Yipee...bring on the weekend...it has been one long week. Paul has been away since Tuesday morning so I have had nobody around to help with the heavy tasks (well actually that is not absolutely true...I recruited an old wheelchair...very useful for getting the feed bags from the feed shed to the barn!) so it was good to see him home.

I am not sure if the feeling remained mutual, I have to say. Unfortunately Paul pulled back the bedcovers with the light on last night. I do have to admit there did seem to be some dark looking fibres in there...along with a bit of grit and a soft toy. Now I know that Paul does not read this blog. I know this because he was asking questions on his return that he would have known the answers to if he did so...therefore I can share...this was how I found Velvet when I woke yesterday morning...yes she is upside down...yes the sheets are now in the wash!﻿ 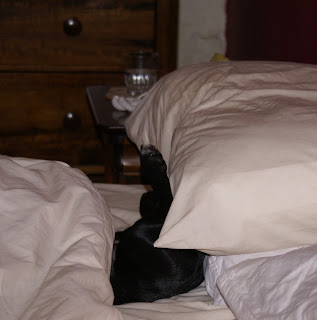 Velvet taking up Paul's side of the bed!
We are just waiting for Robyn and Craig to arrive to go through a few alpaca updates, before we head off to India (later next week). We are very fortunate that they take their annual leave in order to look after the farm for us. Mum, Dad and Amanda also kindly help out. There will be no changes to the routines, so private diners will still be catered for. Spoilt alpacas?...No.... just individualised holistic care﻿!
We are going to give most of the herd their routine Cydectin injections today (to cover for worms and mites). The weanlings will be left until we get back as Explorer and Roma need to have theirs within 14 days of going to the Futurity. Lady Gaga and friends will also be left until they come out of quarantine and before they join the main herd (probably next month).
I see that the Futurity stud services auction is back up and running after the hacking incidence. What is going on...who would target alpaca services!?? The select auction appears still to be unavailable, although I see that EP Cambridge have their auction female on their website...a Navigator daughter no less!
The trek to the post box is getting more interesting. As I am actually on holiday for my Fiftiest birthday (I've stopped saying 'big birthday'...just in case people think that it is an even bigger one) cards have been trickling in all week. Yesterday I received a surprise greeting from Australia...after a bad experience earlier in the week...it is great to know how nice the majority of people really are.
Posted by Unknown at 08:32