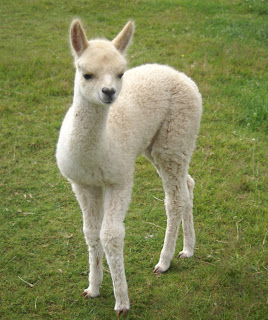 Following Sunday's lecture on alpaca sire selection there has been lots of discussions in our house surrounding the desired qualities within stud males, both ours and others available.

Ideally we would all love that finest, densest male with perfect confirmation who is totally free of guard hair...unfortunately he hasn't yet been born and if he had most of us mere mortals could not afford to buy him!

In the meantime most of us try to use the best stud males that we can to suit each individual female in the hope that we might just breed perfection.

Now this brings us to Finian (pictured in the summer). Finian is the friendliest little fella with a lovely fawn fleece. A fleece that has been deemed good enough for him to be of stud quality. Great news?...Yes, but Finian has already been sold as a pet.

Finian is lovely and is a very good male, but for us he is not an elite male which is where we want to be. Therefore we feel much happier for him to be going to a new home (non-breeders) where he will be loved dearly and his fleece will be appreciated and used, than he be sold as a potential stud male and possibly only work for a couple of years. We have however bred his mum (Holly) to Legacy of Purston again in the hope of achieving a female version of Finian. Fingers crossed. Holly is due a girl after having three boys in a row!

The lucky boys; Finian, Kenzie and Noah will be going to North Yorkshire once they are weaned and halter trained. Bev and Andy (who just missed out on our boys sold earlier this year) had pre-ordered three boys from this seasons crop. It is strange knowing from such a young age that they are going and I still have got far too attached...it would be impossible not to with Finian who follows me about...but it has been lovely getting to know Bev and Andy well and to know that they are going to have plenty of hands on experience before the boys are delivered. Hopefully they will help with the halter training too...it's easy Bev! 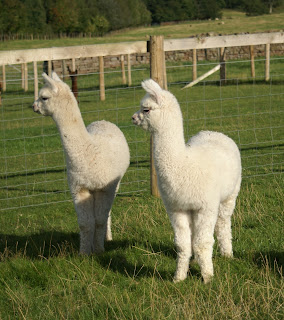 Kenzie (left) and Noah﻿
I had a knitting lesson yesterday. I did master casting on, stocking stitch, rib and moss stitch to a reasonable standard. Mum decided that it was much easier to teach me now than it had been when I was a child. I think the difference might be that she tried to  force me to learn as a child. A willing pupil is always better! Now I need to learn how to correct the mistakes. But do you know what?...I actually enjoyed it...is another obsession about to take hold?﻿
Posted by Unknown at 08:12