It has been a routine service for all the herd this morning. They are all looking tip top; which is now more then can be said for me. Toe nail trimming is not good for my old nurses' back!

I am also covered top to toe in mineral drench. Earlier this year we changed to the JG Animal Health brand which advises a 30ml dose. Not the easiest thing to get down when it tastes rather nasty. Very salty. Yes don't think about it... it wasn't meant to be a taste assessment...I am just hoping it was first hand rather than...

We had been using Maxigro which is much more palatable (it appears) and only requires a 5ml dose. However we have learnt that this gives a very short term boost (2-3weeks) as apposed to a 2-3 month benefit with the JG brand. We will persevere. Well at least until we have finished our supplies!

I couldn't be so mean as to give it to the cria who got a 2ml dose of Kick Start which appears to taste nice (didn't try that one). Explorer clamped his teeth down on my finger then went off grumbling; much to Paul's amusement. He really must take after Navigator, as his mum Camilla is such a poppet and so pretty too!

Yesterday Paul's sister Jill came to visit along with Carly, Maddie and George. Pony grooming is normally highest on the list but the cria got star billing yesterday. Instructions were given to keep hands down and to avoid sudden movements: 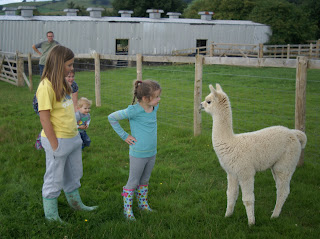 That's it hands down...Finnian comes to check Maddie out... 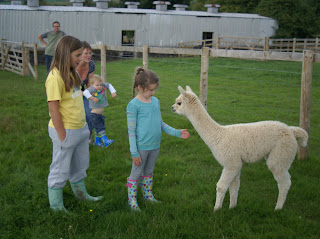 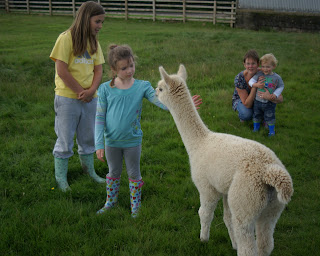 Yes very soft!
Velvet had a very busy day with all the attention from the children and plenty of fresh air. Definitely dog tired when you can sleep next to Paul's shoes! 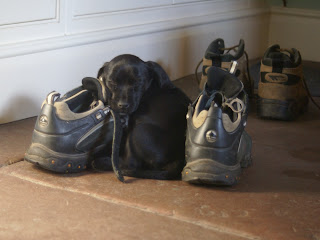 Velvet...dog napping!
Paul has made the decision to cut the hay field tomorrow. The weather forecast isn't fantastic but we are going for it. Plans were for the girls with cria to be grazing the hay field by now. We want to get them moved in order to get a new concrete floor laid in the barn. Much easier for scrubbing out than rubber mats and it will hopefully cut down on the toe nail trimming requirements!
And finally one for Jill... George on a very fat Gypsy...she is on restricted grass hard as it is to believe! 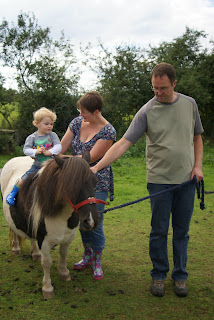 George and Gypsy
Posted by Unknown at 16:18