A weekend of alpaca chatter... 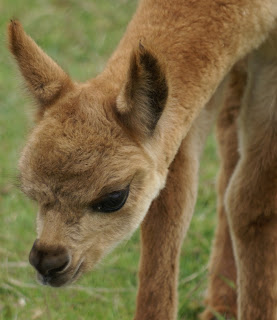 Yet again a very busy weekend. No births this time; but we did have a couple of hundred visitors!

The open garden weekend was a great success with visitors starting off with a 'big breakfast' in the village hall and finishing off with a cream tea in the church hall. Our alpacas generated a lot of interest; so much so that we were a little hoarse by the end of the weekend.

We are fortunate to live in a farming community and therefore no one had any issues about walking over disinfectant mats; even in flip flops! We didn't allow access into the alpaca paddocks but everyone was happy to view from a little distance. I have to say the girls did seem to enjoy all the admiration that they received. There were certainly a lot of cameras at the ready and some willing models.

Whereas most people were doing last minute weeding before the opening, we were doing last minute poo picking, we did however get plenty of compliments about the garden. Worth the hard work. We managed to get all our weighing and cria jobs out of the way early. We have a few sticky eyes this year. I think the flies have been a real nuisance this summer. Most are just requiring a clean with some sterile water but a couple we are treating with antibiotic eye drops.

We even managed to fit in some spit offs. Camilla declined Legacy's affections so it looks like she has ovulated. In fact everyone turned the poor boy down. That's four girls (one Legacy and three Hollywood) who have spat off twice now so are hopefully pregnant.

I had the camera with me whilst poo picking; of course! The photo above is of Parisien. She has the most lovely face but always makes it difficult to capture her on film. The photo below is of Tabitha. She looks so like Legacy and is so sweet. Phoebe still just leaves her all over the place. It is hardly surprising that she is pretty confident around me as I am always having to catch her to reunite her with her mum. 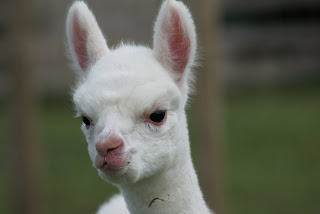 Tabitha...managing to get hay in her fleece already!
Posted by Unknown at 14:09